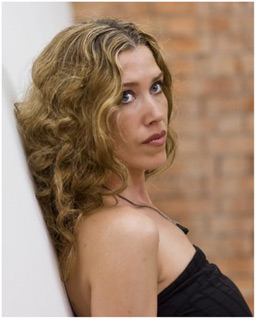 Andrea and I relax over brunch with Vancouver singer/songwriter, Farrell Spence, and her long-time friend and fellow Winnipeg ex-patriot, Boyan, at Vancouver’s Marmalade Kitchen & Grill

On, quite arguably, the first brilliant sunny day of the year we talk about the subject of travel, life in Vancouver and Ireland, Farrell’s debut album from 2007, and the final few months leading up to her anticipated follow up project and second CD that she wrote in Ireland and recorded in Italy with Neapolitan musician, Francesco Forni.

Despite the weather forecast, a pristine teal sky illustrates the collision of geography and architecture that makes Vancouver what it is. Farrell muses on the balance and imbalance that international living creates– “Between living in Vancouver, Ireland and spending a great deal of time in Italy and the UK, these places and spaces, people I have met and bonded with, are the fabric that brings my music together… Each city and each person contributing a puzzle piece to the bigger picture.”

So, it is no surprise that Farrell is remembered in places like Cork, Dublin and Rome. When you are keeping company with the likes of The Paperboys and The Be Good Tanyas – the osmosis alone is going to create some crazy good music and some even better live shows.

I played Farrell’s debut album “A Town Called Hell” about a month back while running a gauntlet of Saturday morning errands. My Honda (with its beefed up audio system) is where I proof audio projects: The reasoning being, if a CD sounds great in my car, it will sound great anywhere – and at the same time reveal any sonic flaws that might not reveal themselves in a more ideal environment.

“A Town called Hell” is a matrix of post-adolescent angst that is, at times, raw in its honesty and casually literal in its invitation into Farrell’s world. I found the 10 songs on the album thematic and contiguous – not unlike some AOR classics from the late seventies – and resonant in its ability to reach into my memories.

Between bites of a very good brunch at Marmalade, Farrell explains… “A Town called Hell is every small town that many of us grew up in – where progress marches on, industry breaks down, jobs are lost…where hearts are broken and lifelong friendships are forged. In ‘Those Were the Days’ the lyrics step back into the time of adolescence where a sense of wonder still reigned supreme… and in ‘I Drink’ the lyrics illustrate the visceral universality of familial fragmentation, loneliness and resignation in its
barest form.”

Up close, Farrell is an amalgam of the classic beauty and techno-geek personified. By being hands on with virtually every stage of production during production of her music, and knowing the tools inside and out, there is an element of clarity
that is present on every track. Her love of Old-Time Radio and (of all things) Shortwave Radio, are things that will percolate to the surface on some songs on the expected new album.

Farrell loves coffee and starts her day with an Americano made in a Bialetti on her gas-range. The special relationship she holds with caffeine imbues a creative energy into her endeavors from writing music to simply rising from bed each morning.

We wrap up our lunch with a collective sigh at the spectacular weather and beauty of Vancouver B.C.‘s skyline.

Farrell continues to work on her latest project and we are looking forward to it. You can hear some of Farrell’s work over on cbc 3 – and her CD is on CD Baby