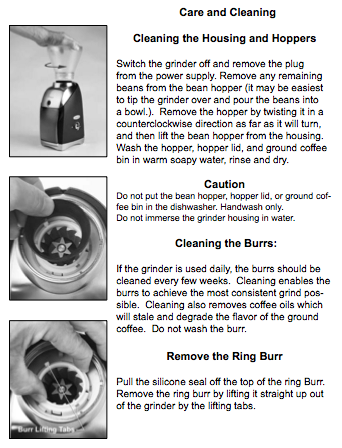 In the previous chapter we revealed what could, quite arguably, be the critics pick in universal coffee grinders for the first leg of the 21st Century... the Baratza Virtuoso grinder. We also discussed the basics of coffee grinding and why some grinders are better than others.

We also revealed how the coffee grinder is often the most neglected link in the coffee or espresso brewing process; the least asked about, the least known about and the least cared about.

Many of my long time readers are the first to admit the primary failing during their wonder years of getting on the specialty coffee bandwagon...
"I put all my eggs in one basket - I got myself a great espresso machine and wondered why the results were less than satisfying... and then I found out - that maybe getting my 1/2 pound and one pound bags of espresso pre-ground was maybe not such a good idea..."

An important point of review: When coffee is roasted for sale or shipment, it has a best before date - Coffee, typically 3 to 7 days out of the roaster, produces the best results and best flavor. 3 to 7 days. 10 day old roast coffee is stretching it - unless you take some extraordinary and questionable methods to extend that period - like freezing... Ack!

Whole bean roast coffee. It's volatile. It's robust. But you have to treat it with respect!

That said, grind that coffee in the store and it is fresh for about 3 or 4 hours top before the ravages of oxygen spoil the batch. And I am talking about stale here folks. Stale coffee.

This is where I get the most profoundly confused looks when I am addressing a group of coffee lovers.
"Stale coffee? How can coffee go stale? And why does it go stale faster when it is ground?"

Coffee is a food product - and although it is not as nutritious as, say, lettuce, you would not want to make a salad with a brown head of slimy lettuce - and if you would not do that, why would you buy a bag of whole bean or ground coffee from a lucite bin in a grocery store that may have been roasted weeks or months earlier?

"But I like the taste Colin!"
That was an actual answer when I challenged a shopper (that I knew) in a local chain grocer.

Ok, so I cannot help that sad individual... but I can help you!

One by one everyone takes a great sniff of the pre-ground stuff. Mmmm. Smells like coffee.
And then they smell the beans in the air tight storage tin - beans with some life still left. Ahhh. Nicer.
Finally, we hand out samples of the just roasted stuff. I encourage people to crush the beans in their hands and hold the results up to their noses. Some go so far as to pop them in their mouth and chomp them down - also okay.

And then we grind the most recently roasted coffee.
"Ahhh. Ohhh. Yea!!!"

Coffee is a very aromatic product. Most of the time, it does actually smell better than it tastes. Cannot do much about that - that is an ironic quality of coffee. The physical reality of the coffee bean is - it has a protective shield built in to protect it for a while. This is called CO2 or Carbon Dioxide. When coffee is roasted, during and after, it will release more than 5 times its volume in CO2 - and while that CO2 is making its way to the surface of the bean, it is keeping O2 or Oxygen from making an incursion into the coffee, staling it.

Oxygen is, after all, the bitter enemy of roast coffee - it is the enemy of a lot of things... but that is outside the context of this discussion.

This is why you want to grind your coffee moments before you brew it.
If you do not, all that flavor ends up somewhere else... and not in your cup.

Ok then. Lecture over.
"So where can I get a grinder that is going to do it all for me?"

That is a very common question because coffee lovers in the 21st Century are not just making espresso at home... they are doing drip, they are doing French Press... and even more.

Therein lies the challenge - finding a coffee grinder that is going to do double or triple duty on all the wonderful methods of brewing up a cappuccino, or straight espresso, or Bodum, or Vacuum pot.

For me that is pretty remarkable considering that 5 years ago, a coffee fan would be looking at $400 or more for a great grinder like the Rancilio Rocky (which you can still buy and it is still a great grinder...) - and convincing someone to spend more than a few hundred dollars on an "add-on" to a "passion" that has already set them back $500 to $1000... is, not surprising, challenging.

So, in the last year or so, I have been given 5 Baratza Virtuoso grinders to expose to a myriad of users and situations - some of them perfect for this grinder... others not so much.

The Baratza Virtuoso grinder is a non-commercial home multi-purpose grinder solely intended for single family use - ideally less than an hours worth of activity a day. The Baratza Virtuoso grinder is made with commercial grade parts, like the Italian made conical burrs. This is a plus because the average family may have more than one coffee drinker under the roof - and they might want it... their way. So what did we hear and find?

Actually, from the bulk of our beta testers we heard very little - because there were no complaints - this is generally how it works. I have given away about 7 pump-driven espresso machines in the last 3 years - ostensibly over 2000 dollars worth of worthy espresso machines - by Gaggia, Solis and Saeco for those who are interested. And not one person has come back and said, "Colin, this free espresso maker you gave me to keep, test and cherish til death me part... Well, it is a piece of crap!"

The Baratza Virtuoso grinder? We only had one call back in all the distribution tests we were doing. One. From a store that was using it so far beyond its limits that it should have totally melted down. Here is its story.

We gave a Baratza Virtuoso grinder and a Technivorm KBT-741 coffee brewer to a lovely young lady on the University Campus that I work on - for her office. Single use. One user. One consumer. Somewhere along the way, she "opened" her own "speakeasy" coffee bar in the department that she worked - so at any given moment there were 3 to 5 people coming in, all day, to make themselves pots of coffee. Before I knew it, I heard that the grinder was churning out upwards of 1 pound of coffee a day and the brewer was cranking out 3 to 5 40 fluid ounce pots of coffee... in an 8 hour day. 5 days a week. Apparently this went on for over 6 months... maybe 8 months.

The way I saw it, the Baratza Virtuoso grinder was getting about 5 times the daily usage it should have. After 6 to 8 months they called me... "Colin, I think we broke the grinder..."

Who is this we you are talking about? She told me what was going on. Ah, I said. I see. Let me come and have a look.

In their feast of coffee drinking and soul crushing overuse of the grinder they had lost a key piece - a rubber collar that keeps stray beans from venturing down into the mechanism. Beans got into the inner workings of the machine and it jammed the bean hopper... actually it jammed the burr adjust mechanism - but the user at that particular moment thought that they could clear the jam by giving the bean hopper a good robust tough-guy twist.

Ouch. Total damage? A ring on the burr assembly that has two nylon tabs (that the bean hopper locks into) were snapped off. Total repair cost? About $12. Oh yea - they lost the rubber collar. I got a couple of those for free from Baratza.

The thing was - the unit was getting 4 to 5 times more usage than it was designed for. And it held up until Brutus got a hold of it. Not bad.

My other testers? Not a word from them. Seems everything is OK.
Me? I have been using one of these in my lab 5 days a week twice a day - to serve coffee to 4 or 5 people... at 10AM and 3PM. Am I overusing it? Yes. Is it holding up alright? Like a charm.

The Technivorm KBT-741 brewer that they were trying to work to death? It did not break a sweat. Apart from being filthy with ground coffee, splashed coffee and what-not it was no worse for the wear. It is back in my lab where it makes the occasional pot. Powerful testimony for anyone who wants one of the best coffee brewers ever made.

I use a Baratza Virtuoso grinder in my kitchen at home from time to time, along side a Rancilio Rocky (which I will never, ever part with!) and a Bodum Antigua - a trio of really good grinders at 3 different price points. The Baratza Virtuoso grinder is my go to grinder for all purpose stuff - even for testing espresso machines of all pedigree - because it is the number one grinder that I suggest for people wanting to get the "good stuff" - espresso machine and grinder, for a price that most people can afford.

Because in my World, one cannot afford to compromise on the most important tool in the process... The Coffee Grinder!

In my third and final installment on the Baratza Virtuoso Grinder I will discuss my hands on experiences with the grinder as well as show lots of photos of the unit... inside and out. Stay tuned.
Colin Newell, creator of the coffeecrew website, lives and works in Victoria B.C. Canada - when he started this resource 14 years ago, he had no idea where it would lead... and cannot believe that he is still talking about and teaching specialty coffee to the happy masses. 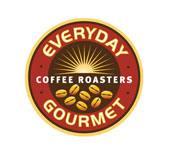